A few days ago, our alert system notified us that several of the servers of some clients had a totally abrupt load growth in the system, even in some cases a direct downtime occurred.

After entering the systems, after a brief initial analysis of the Geko team, we detected that the systems had been compromised by an attack on them derived from a vulnerability in their Jenkins platform through the recognized exploit CVE-2018-1000861. To summarize, it basically allows you to inject and execute code on the server. 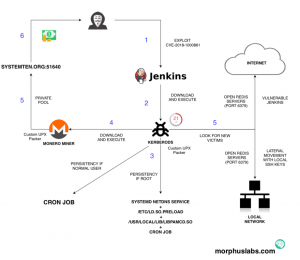 This scheme details the steps that the script does, but summarizing and after our analysis we basically detect:

After several hours of investigation, we detected that it was necessary to run a busybox on Linux in order to eliminate the masked process. Geko used this: https://busybox.net/downloads/binaries/1.30.0-i686/busybox

And thanks to some processes in the repo https://git.laucyun.com/laucyun and our own scripts, we managed to eliminate the threat until we were able to secure the systems again and reinstall the compromised ones.

Keep in mind that attack scripts have a high level of depth and complexity, and despite being reverse engineered, as it is a constantly improving repository by the group of Chinese attackers “Rocke Group”, it is practically impossible to guarantee 100 % that the system is fully protected.

The most surprising thing of all is that a priori it is a malware that infects automatically and in the README of the malware code repo the group of hacker attackers indicate that their intentions are not to break anything, simply to identify security vulnerabilities and remove some “slice” mining cryptocurrencies without going any further … they even detail the possibility of helping in case the infected require support … which we obviously did not do.

We leave you the link to our public repository where you have a first version of the cleaning script that we use summarized:

From Geko we will be happy to help you in case of identifying this vulnerability in your system, contact us!