Kubernetes vs Docker, find out how they are different

For DevOps engineers, keeping up to date with all the tools surrounding new technologies is more important than ever. Two essential tools today are Kubernetes and Docker, both of which may seem the same at first glance, both allow you to do similar things like running containers, however both work on different layers of the Cloud infrastructure. In this blog post, we will try to clarify both terms.

What is a container?

Let’s start with a brief definition of what exactly a container is. Containers are a form of operating system virtualisation. A single container can be used to run anything from a small microservice or software process to a larger application.

A container is like a compact box that contains all the dependencies of an application in one place. This not only allows an application to run quickly on a system, but also makes it portable, easy to transfer from one environment to another.

Unlike virtual machines, containers only provide virtualization for the operating system layer and necessary dependencies, making them lighter and more portable, with a significantly lower system load. They can be easily transferred from one environment to another and operate consistently at all times by containing everything necessary for the application to function.

Docker is an open source containerisation platform launched by Docker Inc. in 2013, i.e. Docker is a technology used to create and run software containers. In essence Docker is a system that allows to build, transfer, deploy and run containers with the applications inside in a very simple and reliable way, guaranteeing a scalable deployment in an efficient way regardless of the host operating system.

Docker streamlines the creation of containers with tools such as dockerfiles, and streamlines the code-like definition of containerised applications through docker-compose. These tools are used to create a development lifecycle, from defining what goes inside a container, to establishing its environment and access to resources. It also helps developers move workloads from their local environment, to testing to production, eliminating inconsistencies and dependencies between environments. As the container being deployed will be the same as the one in which it was developed, the environment will have the same predictable outcome. 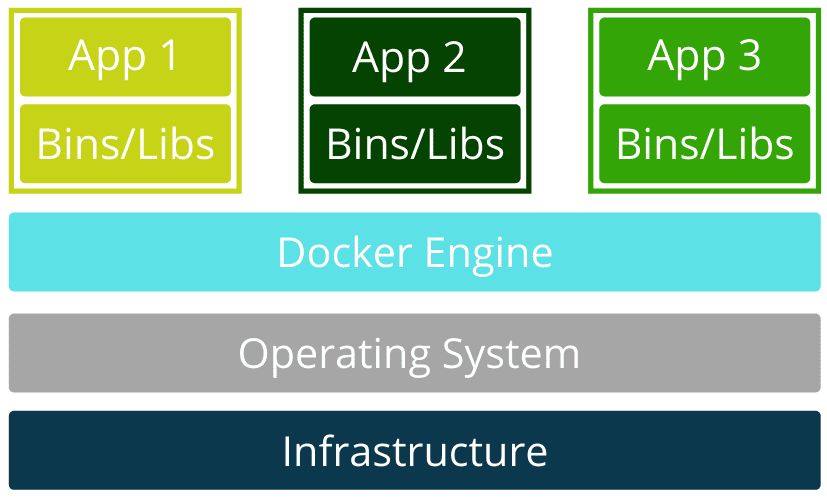 Kubernetes (also known as k8s) is a container platform orchestrator, like Docker. To be more precise, Kubernetes is a set of open source tools for building a scalable, fault-tolerant platform designed to automate and centrally manage containerised applications. Learn more in detail about this tool in our post What is Kubernetes? 👈

So how are Docker and Kubernetes similar or different?

As we can understand from the above, Docker and Kubernetes are related technologies, but they cannot be directly compared with each other. In fact, the two tools complement each other and help build cloud-native or microservices architectures. In other words, Kubernetes builds on top of Docker, using it as an engine to run containers, but it takes care of exactly how these containers are run: configuration, replication, access to system resources, or network communication. It takes care of generating these configurations and communicating them to Docker so that it can apply them.

Therefore, the comparison between Kubernetes and Docker is not as simple as creating a list of pros and cons or feature by feature. However, there is a Kubernetes-like orchestration technology developed by Docker Inc. called Docker Swarm, which provides us with Kubernetes-like elements such as replication management or load balancing between containers.

In summary, Docker provides an open standard for packaging and distributing containerised applications and is sufficient to address simple use cases and Kubernetes leverages a broad ecosystem of tools along with continuous integration/continuous deployment (CI/CD) and other DevOps practices to orchestrate large sets of containers from development to production environments.

At Geko Cloud we are at your disposal if you are looking for a partner to implement Kubernetes or Docker, migrate to the cloud, move to a microservices model, or manage your platform in the cloud. Contact us to find out more about our services.

This website uses cookies to improve your experience while you navigate through the website. Out of these, the cookies that are categorized as necessary are stored on your browser as they are essential for the working of basic functionalities of the website. We also use third-party cookies that help us analyze and understand how you use this website. These cookies will be stored in your browser only with your consent. You also have the option to opt-out of these cookies. But opting out of some of these cookies may affect your browsing experience.
Necessary Always Enabled
Necessary cookies are absolutely essential for the website to function properly. These cookies ensure basic functionalities and security features of the website, anonymously.
Functional
Functional cookies help to perform certain functionalities like sharing the content of the website on social media platforms, collect feedbacks, and other third-party features.
Performance
Performance cookies are used to understand and analyze the key performance indexes of the website which helps in delivering a better user experience for the visitors.
Advertisement
Advertisement cookies are used to provide visitors with relevant ads and marketing campaigns. These cookies track visitors across websites and collect information to provide customized ads.
Others
Other uncategorized cookies are those that are being analyzed and have not been classified into a category as yet.
SAVE & ACCEPT